The tennis court surface is a fundamental part of the game of tennis.

Without any doubt, tennis is one of the most entertaining and favorite games among millions of people of all ages across the globe. It improves both physical and mental health, brings positive emotions and gives you social benefits as well. What a pleasure to play tennis with your friend, especially outside! All you need is a racquet, tennis balls, a court and a partner. Alternatively, you can even play on your own, practicing serve on the court or hitting groundstrokes and volleys against the wall.

Tennis can be played on different surfaces and each surface has its own characteristics, which affects the speed and style of play. I guess you wondered which tennis court surface is the best. It’s quite difficult to answer this question, as each type of surface has its advantages and disadvantages and appeals to a certain playing style. For example, Rafael Nadal, an extraordinary Spanish player, is the best clay court specialist, when Roger Federer performs better on grass courts. Novak Djokovic, another genius tennis player is more confident on hard courts.

Which tennis court surface is the best?

Let’s take a look at the most popular tennis court surfaces and compare their characteristics. There are four major types of courts, depending on the materials used for the court surface: clay courts, hard courts, grass courts and carpet courts.

Clay courts are made of crushed stones, shale and bricks and have red or orange color; less frequently, when they are composed of basalt, a natural stone, they have green colour. The French Open, one of the four Grand Slam tournaments, is played on clay courts, when green clay is used only for the tournaments in the United States.

On clay, tennis ball bounces slower and higher, than on other courts, which gives advantages to confident baseline players, who adds a lot of topspin and play mostly in a defensive style. Another key feature of clay courts is the ability to slide to the ball, so the player needs good flexibility. Among the reasons why the play on a clay court is a good idea are the following: the softer surface of this type of court is not so harmful to the body; this surface improves endurance and physical condition, as the player needs to run more and tries to chase every ball. Moreover, a slower game teaches patience and gives more time to make a right decision. Definitely, the most talented and award-winning player, is a Spaniard Rafael Nadal, who managed to win The French Open trophy 12 times and is rightly called “the king of clay”. 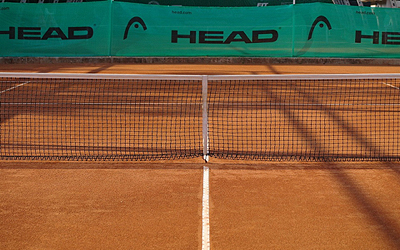 In addition, “en-tout-cas” courts are worth mentioning. En-tout-cas, which means “in any case” or “in any conditions” in French, is a top-quality and the most famous court construction among tennis court builders. This is the well-known artificial sports surface builder, made from crushed bricks and stone. The main advantage of these courts is greatly improved drainage system, that helps the courts to drain quickly after the rain. In Australia, en-tout-cas courts are mostly used in Victoria. 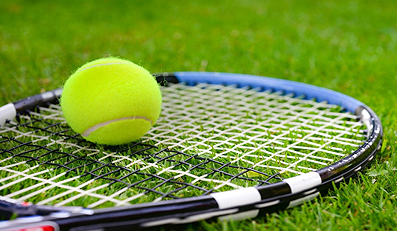 Grass courts are the fastest of all four types of the surfaces, the ball bounces fast and low to the ground, that is why the rallies become much shorter, than on hard, and especially than on clay courts. They are made of natural grass, which demands high maintenance cost, due to constant watering and mowing, that’s why they are not as widely spread, as other tennis surfaces. The most famous tournament, played on grass courts, is Wimbledon, which takes place in London in July. Grass courts favor serve-and-volley tennis players, as serve plays a vital part there, as well as confident net skills. Roger Federer, an outstanding Swiss player, is “unbeatable on grass”, thanks to his perfect technique, quick reaction and good footwork. However, in 2019, Novak Djokovic proved that he could be a decent opponent on grass court as well, winning his 5th title in an epic match on Wimbledon courts.

Hard courts are made of rigid materials and are favorite for most of the players worldwide. They have a smooth surface, so the bounce of the ball is rather predictable and the player can control the game easier. On this type of tennis surface the ball bounces fast and high, so players can hit a big variety of strokes, add spin and make the game more dynamic. Hard courts are suitable for players with aggressive and attacking style, who have powerful serve as well. Two Grand Slam tournaments, the US Open and the Australian Open are played on hard courts, the only difference is that the American Grand Slam uses an acrylic hard court, while the Australian Open uses a synthetic one. An interesting fact is that the Australian Open was played on grass courts before, but switched from them to hard courts in 1988.

The only disadvantage of a hard court is that it has the higher risk of getting an injury, players’ joints suffer a lot when jumping on hard ground. Nevertheless, there is a solution: the cushioning makes the surface softer, which minimizes shock on the body and helps to prevent injuries. A cushioned tennis court is a system with a concrete base with several layers of cushioned rubber, applied before the standard acrylic finish. It helps to reduce impact on athlete’s most vulnerable parts of the body: knees, ankles and feet. 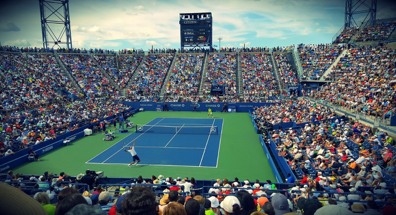 Novak Djokovic, a real mental giant and one of the most complete athletes to have ever played the game, is definitely considered one of the best players on hard court. A Serbian is a record holder of Australian Open titles and won his 8th trophey on Australian tennis court surface in 2020, beating an Austrian Dominic Thiem in an epic 5 set match.

Carpet in tennis means any removable court covering, which is installed temporarily for tennis events. It has soft surface, can be made of different materials, from turf to rubber and may have different bright colors. These courts are similar to grass courts, as the ball bounces fast and low, so they are suitable for players with a good serve and a confident net game. Carpet courts are not used in professional events anymore, they have been replaced by removable hard courts, but some big tournaments, such as the Australian Open (until 2007), WCT Finals, Paris Masters, U.S. Pro Indoor and Kremlin Cup were held on this type of surface before.

Indoor tennis courts are rather convenient, as they are easy to install and maintain and allow to play during any weather conditions. These courts are used for modern indoor professional events such as the ATP Finals.

As you can see, tennis has a great variety of surfaces to choose from, you just need to try out different kinds of courts to find the most suitable for your style of play.

Concrete – 9 things you need to know for better concreting.

Harvesting is the primary and final aspect of farming where you start harvesting your crops until they are mature and ready for use. Since cultivating and taking care of the